What does the word mentalist mean? 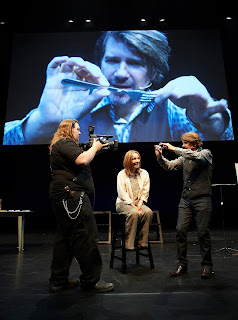 The word “mentalist”  has been used to describe “psychics” and in the U.K., has become a tongue and cheek insult for someone who is behaving strangely or is crazy mostly thanks to the T.V. series “Alan Partridge” and “The Office.”  But what does it mean to us as psychic entertainers and magicians?

The word mentalist originally was used in the context for one "whose tastes are from mental rather than material pleasures", in a book published in 1790 by C.M. Graham.  In 1874 it became known to be associated in context of a mental action due to  H. Maudsley. Then in 1978 again it was popularized in the context of the medical profession for someone who behaves strangely in a book called “On Our Own” by Judi Chamberlin.

But in the context we tend to think of today, the context of the famous NBC TV show and of what we do as an entertainers, it simply means someone who takes his known senses to create the illusion of reading minds or being a psychic.  The line, "I take my five known senses to create the illusion of a sixth" first introduced by Ned Rutledge. who gave me permission to use and promote in my books.

The first documented printed use of this word in newspapers I can find was in the Trenton Evening Times in 1909. The earliest I have found for the term being used in reference to entertainers who “read minds,” was in the 1870’s. 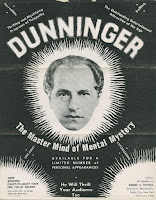 Dunninger, who is thought of by many as being the modern father of mentalists who use tricks on stage, claimed he coined the word from the book  Kybalion (Hermetic Philosophy), published in  1908 where it states that;  “The Principle of Mentalism embodies the truth that "All is Mind.”"

So thinking about it, we may never know who actually coined the term in reference to demonstrations of Stage Mind Reading as I perform it.

Update to this article:

Found online in my research:  Here is a 1902 book, The Law of Mentalism referenced below  https://archive.org/...age/n5/mode/2up

Discourse on Method by Descartes in 1637 establishes rules of effective thinking both in situations of certainty or uncertainty. Mentalism, however, while using rigorous methods, goes beyond focusing on knowledge of all aspects of the human mind.

Henry Sidgwick uses the word mentalism to oppose materialism. In 1874 he established the rules of thought based on clarity, coherence, consensus, which transpose to the systematic mind that tends to operate against material objects.

Irish Bishop George Berkeley in 1710 advocates immaterialism, George Berkeley introduced an idea called mentalism.  This theory stated that the mental function of knowledge was directly associated with the perception and the experiences of the individual.  This theory directly stemmed from Descartes theory of the body influencing the mind.  This theory of mentalism still directly affects the ideas of mental processes in modern psychology.  According to this doctrine, an adequate explanation of human behavior is not possible without reference to mental phenomena. The mentalists are of the opinion that the subject matter of psychology should be the mind, using introspection as the research tool.

His basic idea is that we create our own realities.

In 1902, A. Victor Segno publishes The Law of Mentalism which obtains a global success. It addresses the power on and of the mental faculties in all its forms including hypnotism, telepathy, etc.

Please no negativity here.. if you want to add to the comments please do so in a positive way. Anything else will be removed with no explanation.